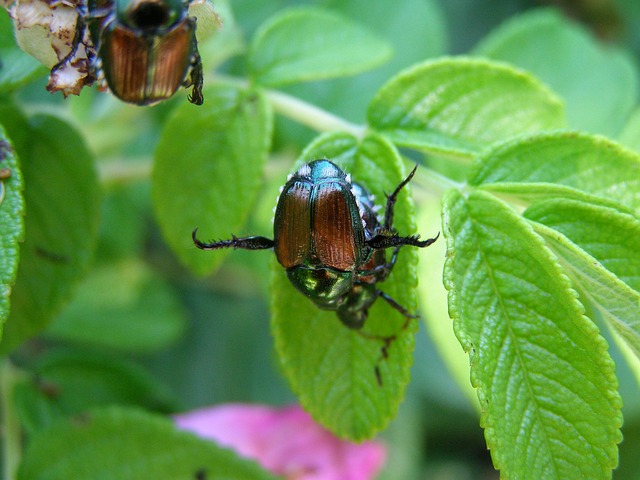 Nothing is quite as frustrating for gardeners as strolling outside, admiring their hours of hard work and discovering plant damage. It becomes even more annoying to see the foliage and at times, flowers of your prized roses, dinner plate hibiscus, morning glory vines, or lush pole bean plants riddled with holes while the culprit brazenly sits upon yet another damaged leaf, staring back as if daring you to flick it away, in hopes of landing on its next unsuspecting victim.

Discovered in North America in the early 1900s, the Japanese beetle is one of the most destructive garden pests around today. Measuring about a ½ inch long, with an attractive shiny metallic-green body and copper coloured wings, the list of plants this beetle avoids is short, tending toward trees and most garden selections including fruit, flowers, vegetable plants and foliage. They are all at risk of becoming part of the beetle’s summer diet.

These voracious eaters begin their garden buffet at an early age. Unlike moles or other underground garden rodents that clean off grass roots and cause temporary disturbances in the lawn, the Japanese beetle larvae devour roots, destroying lawns and killing young vegetable seedlings. While it prefers well kept and fertile turf areas, the Japanese beetle larvae is not terribly picky and will destroy vegetation in just about any type of soil conditions. The larvae (grubs) begin as eggs planted shortly after the adults emerge from the ground in spring and each female beetle lays up to sixty eggs per season that develop into full-grown grubs by the end of summer. The grubs burrow deep into the soil as the temperatures drop from fall to winter, and head back to the soil surface in the spring as the warmer weather returns, where they feast on plant roots for up to six weeks before becoming adults and leaving their childhood home in search of foliage and flowers.

A single Japanese beetle wandering through the foliage will do little harm, but it is rare to find this pest travelling solo. Usually feeding in groups, the adult beetles chew through plant tissue beginning in late June, leaving behind an irregular, lacy-looking version of what the foliage or flower once was. Typically starting at the top of their chosen plant, the beetles eat their way down the vegetation and when done, fly off to their next meal. During their short seven-week life span, Japanese beetles will feed fervently on hot summer days, focusing on plants grown in full sun, eating less on days with cloud cover or wind, and staying away when rain is falling.

Controlling Japanese beetles is challenging. Dealing with one life stage does not always ensure elimination of the next and with adult beetles flying from location to location, numerous families of beetles may visit over the course of the season. Beneficial nematodes attack grubs and are best applied as the young return to the soil surface. Nematodes need moist soil conditions and soil temperatures of at least 68 degrees Fahrenheit to be effective. Adult beetles can be hand-picked from plants or shaken from their perches into soapy water early in the morning, while still sleepy. Removing the pests from the plants reduces the number of beetles that assemble; they prefer to gather in numbers, and feeding beetles attract further pests to the same plant. Chemical controls are available for Japanese beetles, but local laws may or may not permit their use. Japanese beetle traps work well, using pheromones and food scents to lure the insect and can capture hundreds of adult beetles over the summer. Placement of the traps is tricky though as plants on the trap route may fall victim to the beetle before making its way into its final destination. And if you’re neighbours aren’t using them, you’ll get all of theirs. Some people I know have found that using nothing actually seems to minimize the effects – let them fly over to someone else’s trap. Worth a try.

I'm a horticulturalist, a garden experimenter and member of GardenComm International (garden communicators) who enjoys playing in the dirt and growing a wide variety of veggies, plants and flowers in my Zone 5 garden. Check out my website http://www.wowmygarden and the gardenchatter podcast at https://anchor.fm/cheryl-losch.